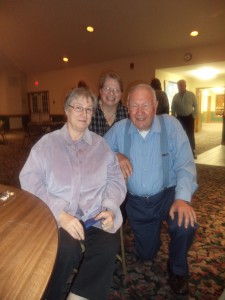 My brother Ralph, sister, Cynthia and me

A milestone in anyone’s life, their daughters had a party for them.  There were lots of guests to share in the celebration and their marriage has been a beautiful example of love and endurance.  I didn’t even take a picture- this one of the three of us was taken by my(our ) niece, Allyson- so I can’t show you the happy couple.

But this picture of me with my brother and sister really makes me think of the passing of years and of familial relationships.  I am a lot  younger than most of my siblings- my parents really had two groups of children – the older 4 and then some years later, the little girls (as we were called).  Three little girls on the tag end – each of us 2 years apart, with me in the middle.  They have both died now- and I am the last of this smaller group – but thankfully the older sibs are mostly still here- three of them still living .

In the crowd of party goers that night were a small contingent of my brothers family- his children and grandchildren of course, and then my sister,my niece and nephew , a cousin and I.  My sister-in-law, Carole has a VERY large family and as I looked around the  room I was made aware of the depth of family relationships.  I share a bond with these people that is so strong it almost hurts.  I look at my brother and see him still as my hero- the man who always had time for me when I was a little girl.  I see my sister and remember when I thought she was the epitome of grace and beauty.  They still hold these places in my heart and memory- the passing of time has just seasoned and strengthened the love that we share.  So I just wanted to take a moment and celebrate family and share a picture of two of the people who have helped to shape the woman I have become.

12 thoughts on “Family and celebrations”